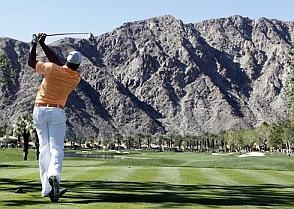 The 60-year-old tournament, to be played Jan. 15-19, will be renamed the Desert Classic, a throwback to when the event was called the Bob Hope Desert Classic from the 1960s to the 1980s.

Desert Classic formerly known as The Career Builder Challenge and the Bob Hope Chrysler Classic is held in La Quinta every January. Desert Classic is one of the PGA Tours most valued professional golf tournaments, and a huge fan favorite. The event draws in golf fans from around the world to watch celebrities and golf professionals play against each other.

First established in 1960, the Bob Hope Classic was one of the better-established golf tournaments in the country.

Originally known as the Palm Springs Golf Classic, its ancestry traces back to the popular Thunderbird Invitational golf tournament, which was held in Palm Springs, California, from 1954 up until 1959.

The Career Builder Challenge is a celebrity pro-am, five-round event on the PGA Tour. Celebrities and amateurs play the first four rounds; professionals only play the fifth round. This event is extremely popular because it is one of few five round events on the tour. Bob Hope's name was added to the tournament in 1965, and continued to be part of the tournament name until 2012.

The Career Builder Challenge was played on three courses, with professionals and their celebrity partners. The three courses are currently as listed:

Bill Haas took home the championship title at the 2015 tournament.

A classic tournament is born

In 1962, Bob Hope teamed with Arnold Palmer to win the pro-am portion of the Palm Springs Desert Classic. Three years later, the event was re-named the Bob Hope Desert Classic and the legendary performer became the indelible master of ceremonies for what would become one of the most beloved events in golf.

From 1965-2011, Hope's named graced the tournament and his presence could always be felt. America's biggest names, from presidents to celebrities to the pros, would come out to the Coachella Valley for great laughs and, sometimes, better golf.

The Hope legacy lives on

In 2012, the tournament struck new sponsorship deals with a pair of new partners and evolved into the Humana Challenge in partnership with the Clinton Foundation.

In May 2015, human capital solutions global leader CareerBuilder assumed title sponsorship from Humana and entered into a six-year pact (through 2021) with the PGA TOUR to have the tournament renamed the CareerBuilder Challenge in partnership with the Clinton Foundation.

Despite the change in name, the event's organizers work with diligence and pride to maintain the legacy of its smiling host. Hope's iconic image can be seen throughout the tournament's facilities, and is highlighted in several places including:

Perhaps the greatest legacy left by Bob Hope is the event's continued charitable contributions to the Coachella Valley. After all, it is known as the tournament that built Eisenhower Medical Center in Rancho Mirage, and the tournament office remains on that location to this day. Since 1960, Desert Classic Charities, the non-profit entity that organizes the event, has donated more than $57 million to Eisenhower Medical Center and many other charitable organizations within the valley.